Shawn Becker has been championing positive change over the course of his 16-year career in law enforcement, including eight years as a detective specializing in… 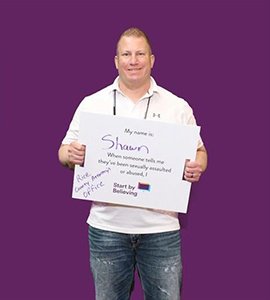 Shawn Becker has 16 years of experience in law enforcement, including eight years as a detective specializing in sexual assault investigations. In this role, Mr. Becker educated numerous new police officers, detectives, prosecutors, community leaders, faith-based leaders, elected officials, counselors, college students, and other community members on how to respond to disclosures of sexual assault and abuse.

In 2013, Mr. Becker spearheaded the implementation of the Start by Believing campaign in Idaho. He provided training to local criminal justice professionals on the impact of personal biases and rape myths, and how their professional responses can potentially affect victims. This training was expanded to include the new officers at the Idaho State Police Academy.

Mr. Becker assisted in the creation of the Start by Believing room at the Canyon County Sheriff’s Office in Caldwell, Idaho. This is a warm and safe space where detectives, victim witness coordinators, prosecutors, and victims can meet for interviews and prepare for court. Other local law enforcement agencies, the prosecutor’s office, social services providers, and business leaders were also provided with an artistic etching of the Start by Believing logo to prominently display in their own space.

Through all of his efforts, Mr. Becker has consistently strived to engage community leaders and other partners. For example, he successfully garnered support for a county-wide proclamation to Start by Believing in Canyon County, Idaho.

Now Mr. Becker has taken his passion and commitment to Start by Believing to Rice County, Minnesota, where he serves as the Crime Victim Services Coordinator. He actively participates in Start by Believing Day activities in Rice County, where he continues to use his creativity to increase awareness of the impact of victim blaming and rape myths throughout his new county.

In one particularly unique example, the Rice County Attorney’s Office, the HOPE Center, and local law enforcement agencies kicked off an event they described as, “Letting the Air Out of Excuses.” First, a large display case was filled with 1,194 balloons, and people were encouraged to guess the total number to win prizes.

The contest was designed to draw attention to the messages written on the balloons, which included:

Why did you go there?

Boys will be boys.

She should have known better.

Next, the balloons were released to visually represent the air being let out of common excuses and justifications for sexual assault. With creative ideas like this, Shawn Becker continues to raise awareness about sexual violence and demonstrates the promise of change and transformation.