Sergeant Liz Donegan led the Austin Police Department to revolutionize its investigation of sexual assault, and played an integral role in forming the Sex Offender Apprehension and Registration Unit. 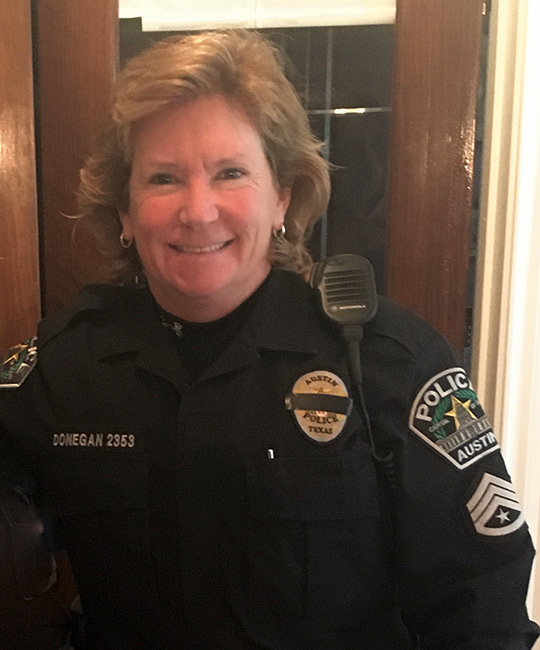 Sergeant Liz Donegan led the Austin Police Department (APD) to revolutionize its investigation of sexual assault, and she played an integral role in forming the Sex Offender Apprehension and Registration Unit (SOAR). Yet her positive impact has extended far beyond her own community, across the country and around the world.

As a leading international expert in the law enforcement response to sexual assault, Sgt. Donegan has worked for decades in the field of law enforcement and served countless victims of sexual assault, as well as other crimes of interpersonal violence. She regularly trains criminal justice professionals within the U.S. military, and serves on a task force convened by the Police Executive Research Forum (PERF) to help law enforcement agencies implement guidance from the U.S. Department of Justice on Identifying and Preventing Gender Bias in Law Enforcement Response to Sexual Assault and Domestic Violence.

Both as a patrol officer, and later as a supervisor, Sgt. Donegan gained extensive expertise through years of hard work in the trenches of human suffering. She understands the dynamics of interpersonal violence and is acutely aware of its devastating impact on victims. This is why she focuses her efforts on sexual violence, a crime that is often overlooked and under-emphasized within law enforcement agencies.

There is a common saying, “You have to see it to believe it.” Yet, in the field of violence against women, the opposite is actually true: “You have to believe it to see it.” Sgt. Liz Donegan is one of those rare individuals who believes, and is therefore willing to see, the reality of sexual violence in her community. While she was supervising the Sex Crimes Unit at the Austin Police Department, she crafted the message of the unit as “We Believe.” No other police department had previously communicated such a powerful message of support for victims, to encourage reporting and reassure victims that they would be treated with the competence and compassion they deserve.