Chief Jerald Monahan has dedicated his 38-year law enforcement career to addressing violence against women and improving responses for survivors and their families. 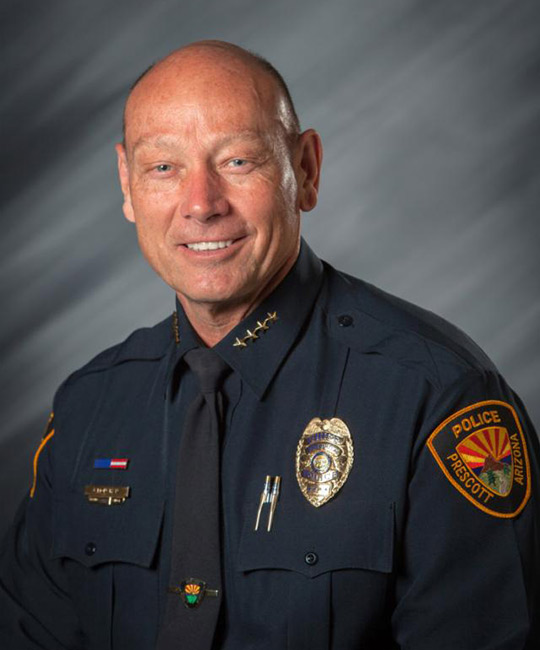 Jerald Monahan dedicated his 38-year law enforcement career to addressing violence against women. With a history of service in municipal police departments as well as the Pinal County Sheriff’s Office, he was the Chief of Police for both Prescott Police Department and Yavapai College in Arizona. We are delighted that he is bringing his decades of experience to the EVAWI staff, where he started as our first-ever Law Enforcement Liaison in November 2017.

Chief Monahan has long been actively involved in a number of community and statewide coalitions, task groups, committees, and boards related to violence against women. This includes the Pinal County Domestic Violence Coalition, where he was instrumental in starting the Pinal County Domestic Violence Fatality Review Team. Chief Monahan also works as a consultant for the National Domestic Violence Fatality Review Initiative, providing training and technical assistance for communities across the nation in the process of developing their own review teams. In Arizona, he was instrumental in establishing multiple domestic violence fatality review teams, where 13 teams now cover most regions in the state.

As a Past President of the Arizona Association of Chiefs of Police (AACOP), Chief Monahan used his connections to gather support for the Start by Believing campaign in numerous cities, counties, and campuses across the state of Arizona, as well as several tribal communities, and beyond. In 2014, he successfully garnered support from the Arizona House of Representatives and the Office of the Governor for Arizona to become the first Start by Believing state. Since then, Chief Monahan has continued his efforts to promote the campaign and is leading the way toward becoming a Start by Believing nation.

Chief Monahan highlights the importance of the campaign, both personally and professionally:

For me, this is a message of support for survivors of sexual violence when they choose to disclose their victimization and a message of accountability for rapists that they cannot hide behind victim silence. This message is much bigger than just for the criminal justice community, it is for all of society, each one of us can be prepared to respond appropriately by taking the pledge to Start by Believing when someone discloses they have been raped.